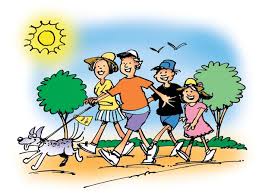 The Anglophone walking group meets once a month from February to June and from September to November.   We walk for about 5km – taking around an hour and a half.  All members are welcome – we have some regulars but also people who dip in and out as it suits them.

We try to arrange walks all over the patch covered by the association, and put together a mixture of seaside and country walks.  There’s nothing too strenuous – although there might be the odd hill – and stout footwear is recommended.

Afterwards we will go to a local auberge or restaurant for lunch, and always choose somewhere with a good value menu.  We’ve found a few gems! You can even just join us for lunch if you like. All we ask is that people book for lunch a few days before so that we can make arrangements with the restaurant.

For further information please email us through our contact page. 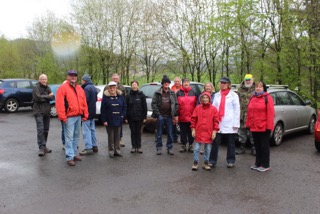 About 16 people and one dog enjoyed a walk in the vicinity of the Abbey at Hambye in the morning of Friday 22nd April 2016, another excellent Anglophone Association event.
Whilst it was raining, sometimes very heavy, prior to the walk, it did not rain during the walk but the ground was very wet.
The guide was excellent as no one got lost, unfortunately the shoes of one walker “gave up the ghost”.
It shows how keen the walkers were to turn up at Hambye on a wet and inclement day.
The next walk will take place under blue skies [I hope]. The walk was uneventful but as a result of the weather some of the timber surfaces [bridges] were very slippery. 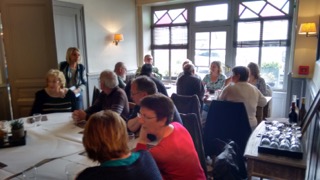 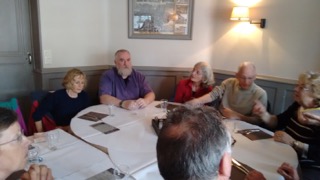 Following the walk a very nice 3 course meal at
Hotel de La Gare at Gavray was taken by the walkers who
gained all the calories they had lost as a consequence of the
walk, the walkers were also joined by two people who did not
go on the walk

Review written by Yvonne member of the reading group.

The introduction to Gone girl starts by describing the need, a previously successful couple, have to move back to the husbands childhood home in a small town in Missouri.

The story then moves back to when successful girl meets successful boy who fall in love and marry and are just “so happy” in their New York home.

However girl loses her job soon to be followed by boy loses job.

Don’t be fooled there’s a lot more story with so many twists and turns, it’ll keep you guessing and turning the pages right to the very last page.

“Wear warm clothes” came the surprising advice from the organisers. Well, it is still February so why would we need the reminder? 27 of us met at the appointed hour and were split into 2 groups, because some parts of the tower structures cannot support more than 14 people. Our group started at the bottom, and sat in the body of the cathedral for an interesting historical summary of over 1000 years of Christianity in the Coutances area.

A cathedral is a symbol of the power and authority of the church throughout history and the talk reflected as much of political history as religious. Our guide was clearly well versed in architecture and history and her spoken English was excellent. The warm clothes were proving to be welcome as we walked around the “Ambulatory”. A new word for our vocabulary: it is the space where clergy (and tourists) walk around behind the altar. Our guide showed us the painted walls, (11th century as I recall) and explained the light airiness as being the result of light coloured windows interspersing the darker coloured windows and the lack of dividing walls between the small chapels. 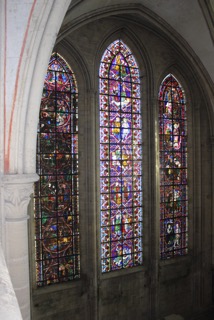 Then it was through a big wooden door and up the first of the spiral stone staircases. Whilst not for the faint hearted, these climbs were not as bad as some of us expected; coming out into small rooms and long stone corridors. We felt very privileged to walk on the uneven pavement overlooking the nave area from small apertures in the wall. Upwards again to the third tier. Across a wooden walkway and up more stone steps. Arriving, eventually on a narrow ledge high in the tower. Our guide explained how a square base becomes an octagon and then becomes a circle; giving the space, light and strength that typifies Coutances cathedral. 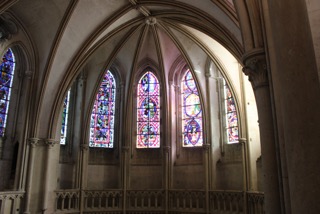 We exclaimed over the ancient graffiti (yes really!) and clutched our spectacles as we gazed down at the splendour below. One window described the link between Thomas Becket (late archbishop of Canterbury) and Normandy. We all revelled in our Norman ancestry as the historic links between our two countries was revealed. Downwards by a different route which meant that the most spectacular view was the climax of the visit. On the walkway above the Ambulatory we could look straight down the nave. It reminded of those high camera views of Royal events at Westminster Abbey.

Afterwards (and by this time well and truly cold, despite the warm clothes) we adjourned to “La Moriniere” for a very Norman lunch of Gallettes and Crepes. It was a very convivial end to an informative morning.

Write up courtesy of a member

The walk on Tuesday l6th Feb. from Coutainville along the dunes as far as the monument of the standing stones, shaped like a boat and back on the beach was invigorating.

The weather was in our favour, the sun shone all morning. After a good walk we had a very nice lunch at the L’Equinoxe, which we thought was good value for the money.

Good company and a good walk looking forward to the next one.

Write up courtesy of Sue & Ray

Review written by one member of the reading group:

Last month’s book club choice, “The Storyteller” by Jodi Picoult, encompassed three main themes: trauma, justice and forgiveness.
Minka is a young Jew living in Poland before and during Nazi occupation. The book vividly contrasts her carefree life before, with the increasingly narrow existence forced upon the community followed by all the horrors of survival in a concentration camp where two German brothers were posted. The description of their upbringing, indoctrination into the Nazi party, prompted discussion about how individuals, as well as groups, can be drawn into committing increasingly horrible acts. Do individuals always ultimately have responsibility for their own actions and what part do social pressures play?

The second theme of justice is explored through the character of Sage, a young women driven by guilt following a car accident which killed her mother and left her facially scarred. She comes from a Jewish family but doesn’t consider herself a Jew. Her Grandmother is Minka, whose fairytale about two brothers, based on folklore about monsters, is started as a carefree young Polish girl before Nazi occupation and continues during the horrors of loss and deprivation in a concentration camp. This encompasses questions about what it means to be a survivor, a story teller, a human being. ” Not all Jews were victims and not all Germans were murderers”. Minka’s story really made us examine that statement.

Sage meets a well liked and respected elderly man through a grief counseling group they both attend.  They have a connection and a friendship develops until he confesses that he was a Nazi officer who committed atrocities.  He wishes Sage to help him die but also wants her forgiveness as a Jew.  Horrified, she reports the confession.  As she and Leo, from the dept of Human Rights and Special Prosecutions,  search to establish the truth of his story, Sage uncovers her Grandmother’s history.  The question this raised was, can murder ever be justice, or mercy?

Forgiveness is the third theme. The issue was debated as to whether, by subsequently turning their lives around and trying to do good in the community, people deserve to be forgiven or should such horrific acts be unforgivable?

The end of the book has a twist that some saw coming and there was discussion about whether the ending was true to Sage’s character as well as debating its moral aspect.