Some thirty members met on Tuesday morning at Le Poulailler for coffee and viennoiseries prior to the AGM.  This was a chance to renew their membership and to meet with friends old and new for a chat. Our friendly host was busy preparing
drinks for the growing number of members arriving.
The business of the day was soon under way at Les Unelles. This year, there was a short presentation from our previous charity, Parentibus, who explained the organisation
and how the charity had grown recently. Our President presented Parentibus with a cheque for 650€. 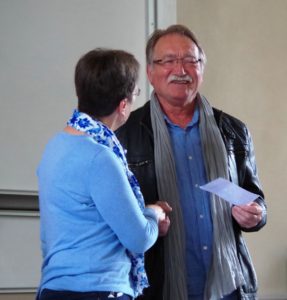 Later in the meeting, Louise reported on the activities of the
Association during the previous year.

Three new members of the Committee were voted in, a charity was selected and a raffle won. Members stayed chatting after the meeting for some time before walking to
the La Taverene du Parvis for lunch.