We gathered at a place called La Gare where there was no longer a station serving Lithaire. I presume that France had a Dr Beeching too. If you looked carefully you could see the old red tiled-roofed station building, which is now a gîte, and the old coal house as well as a long line where there is no longer the railway track that used to cross Route du Plessis but which has now become a very straight path through the woods.
We followed the track towards the hill of Mont Castre, past gardens with barking dogs. It was a long, long straight path which eventually provided us with a slow climb, steep in places, up to the top of the hill. 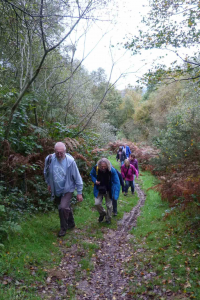 It had been a strategic vantage point for both the Romans and also, more recently, for the Germans in WW II. The hill was one of the US army’s most costly targets in June 1944 with more than 2,000 fatalities as their tanks with teen-aged drivers faltered in the mud and the incline.
It was now impossible to imagine that particular reality as we rambled up through the verdant, damp ferns to the top where teams of workers were busy strimming the path to keep it accessible.Eventually we were afforded a superb view south across Manche and, prettier still, a view of the lake, which revealed just how far we had climbed. 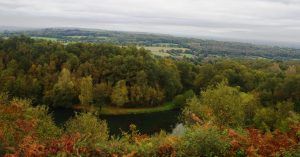 On our slow descent on the other side of the hill, we encountered the remains of prehistoric settlements and then a multitude of scattered masonry of what had once been a château. What a place to build one! 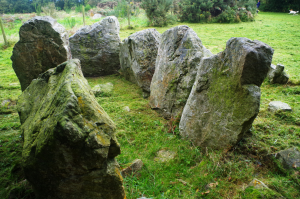 A long gentle return past a farm and a village school eventually brought us back to the long, straight former rail track. As you may imagine, we were very keen to find our way to Le Commerce restaurant in La Haye-du-Puits where we had what we thought was a well-deserved lunch. Only then did it rain.