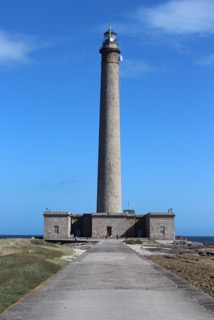 Friday 9th September dawned cloudy and breezy with a threat of isolated showers. We had a long drive ahead of us to get to the top right hand corner of the Cotentin peninsular by 10.45, to visit the lighthouse at Gatteville. There seven of us set off up the 365 steps to get to the top; at 75m it is the second highest phare in the whole of France. 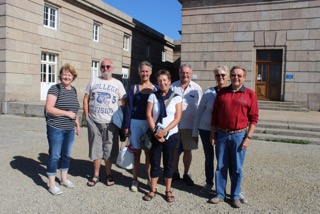 The vertical challenge was met, with a few stops on the way up, and the views in the now sunny, but still breezy, weather were amazing. Thankfully none of us needed the defibrillator that was prominently displayed on the top floor! 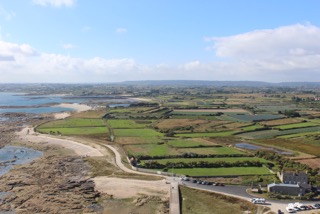 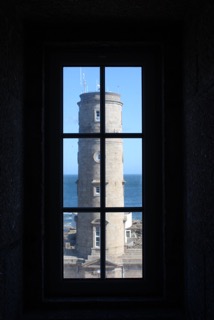 After the long descent, which all agreed was less strenuous but more uncomfortable, we set off in convoy along the delightful coastal road to find St Vaast-le-Hogue and the Le Débarcadére restaurant for lunch. There we were joined by those who had declined the vertiginous lighthouse option. The repast was first class with sixteen of us sharing a convivial couple of hours.

After lunch Kenza got into commanding mode and we set off to get our tickets for the crossing to the Isle of Tatihou, barely a kilometre offshore. The embarkment point was a good ten minutes walk away on the far side of the harbour and some wise souls (or should that be soles?) drove around to save their legs and feet for the perambulations once ashore. The little blue vessel that takes folk back and forth had the look of a large version of a toy boat; more so in that it had wheels! When it arrived to collect the fourteen of us it ‘drove’ up a slope out of the water so that we could step aboard; the same procedure applied at the other end. We visited during high tide, but at low tides it ‘drives’ the whole way! 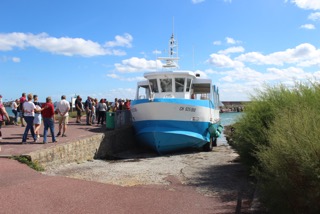 The island of Tatihou has fascinating history – very well explained and illustrated in the museum. But that’s not all there is – there are a variety of gardens, various old stone houses and military barracks as well as the prominent and famous Vaubon Tower, erected as part of the defences put on Tatihou at the beginning of the Thirty Years War.

The weather stayed magnificent all day, even getting hot. By the time we all re-boarded the little blue boat, we knew we had walked a lot. And we all agreed that we had had a really lovely day out.