One hundred years after the Titanic left Cherbourg on its ill fated maiden voyage,
intrepid Association members visited the exhibition commemorating this iconic ship.
Having fortified ourselves with lunch after the drive from Coutances, we arrived at Cité de la Mer.

The building that houses the museum and Titanic exhibition is itself, of considerable architectural interest. 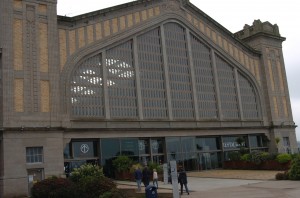 Walking into the baggage hall it was easy to
imagine all the hustle, bustle and excitement as well as the glamour surrounding first class passenger travel.

Going around the exhibition gave you a wonderful opportunity to find
out more about the events leading up to and during the catastrophe.
Moving testimonies from some of the survivors bore witness to the difficulties facing the 2nd and 3rd class passengers in particular. There was also evidence of the great courage and self sacrifice shown by crew members and passengers. 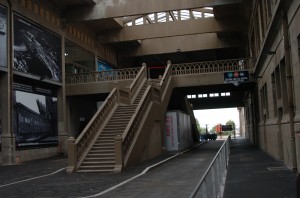 The shipping line prided itself on the level of even its 2nd and 3rd class facilities and you were able to take a look at the various accommodation that was on board. It certainly appeared more civilised than many of the passengers would have perhaps been used to!

Our visit also included an interesting, if somewhat noisy, look around a nuclear submarine. Although it is larger than an ordinary sub, I for one felt that I would probably last for less than a week in that environment! If at anytime in the future you are pondering the question of where to go with family or friends. Cité de la Mer is a place that has much to offer differing ages.