This was a most enjoyable three part visit. We began at the Réo fromagerie in the morning where we were shown a short explanatory film on the making of their Camembert followed by a tour of the factory where we could observe the process. The cheese is made from raw milk from 60 local farms and it takes 2 litres of milk to produce a single round Camembert. After the rennet has been added to the raw milk and the mixture has set and it has been cut into sections, each cheese maker pours a ladle of the curdled milk into a cylindrical cheese mould on a bench. The bench holds sufficient moulds for it to take the operative 45 minutes to complete the bench full of moulds. The process is then repeated 4 more times by which time the mould is full. This eventually becomes the 250 gram Camembert. Having observed the rest of the process we were able to taste the premium, additionally aged cheese and to buy dairy products from the shop 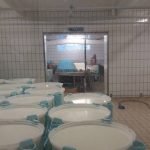 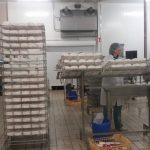 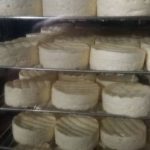 A decent lunch was taken at the Hotel Normandy in town in a relaxed atmosphere and with time to chat amongst ourselves. From the Hotel it was a short walk to Lessay Abbey for the afternoon visit. 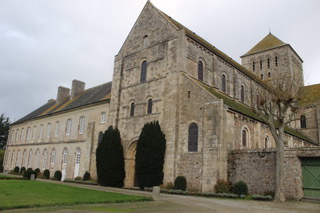 Unfortunately our guide wasn’t there to meet us although she did arrive later making profuse apologies and explaining that she had put the entry in her diary on the wrong day. Whilst waiting we were able to explore the inside of the Abbey. 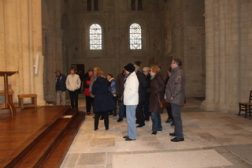 The original Abbey was built in the Romanesque or Norman style in 1056 to a simple design. It was subsequently destroyed twice, once during the religious wars in the Middle Ages and then again by the Germans after the D-Day invasion. The Abbey held such an important place in the hearts of the local people that they were determined to rebuild it after the war. This was completed in 1958 in the original architectural style. The destruction of the building by the Germans had exposed the original ribbed vaulted roof structure which had been built over and hidden. This was successfully reconstituted and it looks magnificent within the building. One of the few examples remaining in Europe of this style of roof architecture is in Durham Cathedral in the UK which was built by the Normans in around 1100. 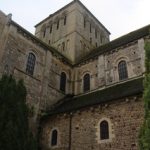 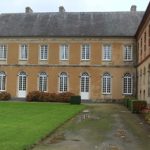 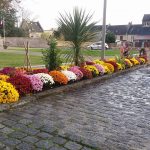 There was still time for a wander through the gardens and for some to return to the Hotel Normandy for a drink and to get warmed up.

We spent a thoroughly enjoyable day.