After a weekend of torrential rain and gale force winds, we were very happy to wake up on the Monday morning to clear blue skies for our last walk of the season at Montpinchon. A group of fourteen of us set out from the centre of this hilltop village, along a lane which took us down into the valley, with some stunning views. We paused at the memorial to a Lancaster bomber which crashed here during the D-Day landings, before continuing along a pretty path through the valley, with a view of the majestic Chateau de Cerisy. We had an enjoyable Lunch at Les Gars Melles in Notre Dame de Cenilly.

The November event was our second guided walk of 2021 with Simon Tasset, this time discovering the town of Saint Lô. We met in the large square in front of the Mairie and then, after accessing the north rampart walls, began our tour of the largest walled town in Manche which is built on a promontory dominating this stretch of the Vire valley. We followed the walls to the western end of the old town enjoying high vantage points over the town beneath the walls, the Vire river and views towards Agneaux.

Some 97% of Saint Lô was destroyed by bombing in 1944 and the architectural style of the town now reflects the overriding urgency and construction methods employed to rebuild the town as quickly as possible after the War.

Some 2000 years ago the area around Saint Lo was the home territory of the Unelles tribe prior to the Roman occupation. Moving on a few hundred years after the Romans leave we see Vikings appearing up the Vire river in about 898 AD and laying siege and razing the town. The Vire river became a route to the Channel and to England. Saint Lô was besieged by the English during the Hundred Years War following their landing at Saint-Vaast-la-Hougue in 1346. Saint Lô also suffered during the protestant catholic Religious Wars.

As Saint Lô developed in the Middle Ages the various trades and crafts settled along the banks of the two tributaries of the Vire which flowed to the north and south of the walled town. There was a 16th Century adage that said if you wanted a good knife then you must buy one at Saint Lô. Weaving was also a predominant industry.

Following the French Revolution, Napoleon chose Saint Lô to be the location for the Prefecture of the new Manche Departement. Napoleon also developed Cherbourg as a defended harbour which led to the decline in the trading influence of Saint Lô but later its prosperity and influence subsequently returned as a result of its new civil administration role.

The weather was kind, we spent a pleasant couple of hours in good company and conversation, finding out there is more to Saint Lô than first meets the eye.

Our October walk was at Pirou. Starting on the edge of Pirou Forest, we headed into open countryside, passing little out of the way hamlets and pretty old houses. We returned via Le Pont à La Reine and a lovely forest track. The walk was mostly on green lanes, but with some extremely quiet roads. Afterwards we had lunch at La Badine at Créances Plage.

Our first walk of the new season was at Orval just south of Coutances.

The walk began on the heights of Falivent, with fantastic views across to Hyenville and Quettreville. We caight a glimpse of Le Pont Neuf with its rare 17th century fishing bridge, then walked alongside the River Sienne’s water meadows. We then returned to Orval and its romanesque church, along shady green lanes, passing the village lavoir and drinking trough. The walk was partly on very quiet roads and partly on green lanes. Afterwards we had a picnic lunch.

This event rounded off the summer and it was a real pleasure to eat, drink, chat and laugh together, after so many months of Covid restrictions in the lovely garden our two of our members.

From their home we drove the short distance to the Mausoleum just outside Roncey, where we were met by our guide, the former Mayor of Roncey. We were struck by the sheer size of this monument, with its castle-like design and tall tower. It was amusing to note that the tower remained slightly unfinished, as apparently tax only becomes payable once a building is completed!

After recounting the life story of Auguste Letenneur, who had this monument built for himself and his family, we were taken on a tour of the building. We began in the crypt, which once held the bodies of Auguste Letenneur, his wife and two of their children, until these remains were moved to the graveyard in Roncey in 1972. We then climbed up to what was the dining-room on the first floor and two bedrooms above, used for entertaining and lodging family members from afar on the occasion of religious ceremonies. The views from the very top of the tower were breathtaking.

The final surprise was to be found in the grounds: The concrete fountain built by Auguste Letenneur himself and was of a striking design indeed and an unusual monument to the dead.

This was our second visit to the mini golf centre at Saint-Auban-des Preaux and on Thursday 19th August thirteen of us met to test our skills. After a rainy start to the day the sun arrived as we were sitting under the awning having our picnic. It was so good to be together again and to do something outdoors. It was the first group meeting we’d had since the Covid shut down. We were arranged in four groups of three people which as a good number because it allowed us to talk to each other, play, laugh and possibly not to embarrass ourselves by miss-putting.

We had one team win and some individual successes too. The winners were rewarded with small prizes and all agreed the afternoon had been thoroughly enjoyable and good fun.

We were met by the owner, who with his partner bought the site 8 years ago. Since then, they have restored the garden, and the chateau itself is a guest house.

We began with a delightful picnic in the valley. We were then given a guided tour of the gardens. The chateau itself is 18th century. From the terrace there is a view of Mont St Michel through the trees. The paths snake around in and out of the trees, providing lovely views.

The garden is home to two swans, peacocks and some beautiful Frison horses. It is the only listed ‘Jardin Remarquable’ in southern Manche.
It is a lovely garden to visit, a place where you could easily spend a couple of hours on a nice day.

In 2019 the assciation started with a new activity – the CamerAnglo Photo competion.

An enthusiastic group from the Anglophone Association Coutances met for a guided walking tour facilitated by PAHC (Pays d’art et d’histoire du Coutançais). Many interesting and surprising discoveries were made about how life was led back in the Middles Ages and a detailed explanation given about the layout and architecture that still remains to this day. 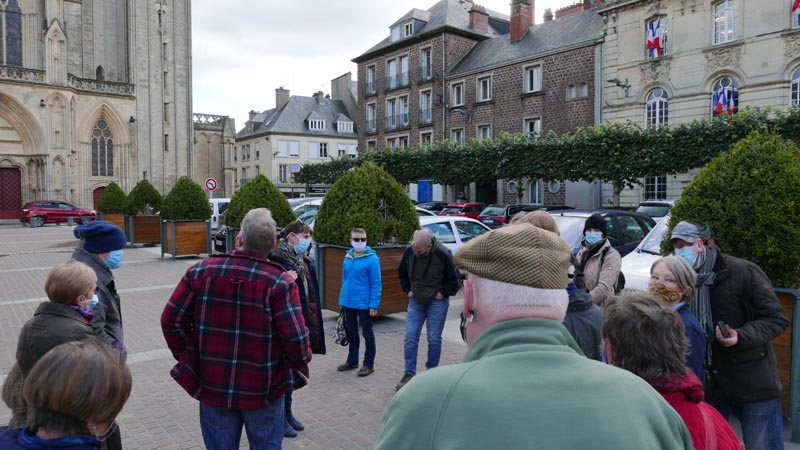 Our eyes were opened wider on the town and its dwellers!

The meeting that was postponed from April 2020 was eventually convened on Friday, 9 October. Twenty-two members attended the meeting, which included eight committee members. Covid-19 restrictions were in force and preparations had been made prior to the meeting to enable the business of the day to be conducted as efficiently as possible. Reports from the President and Treasurer and minutes of the 2019 meeting had been previously circulated to members and these were approved at the meeting. The re-election of Editor and Treasurer respectively were also approved by the meeting, as well as the co-opting of a member to the committee. Unfortunately Covid-19 restrictions prevented much further socialising and unlike past years there was no post AGM luncheon.

The next Annual General Meeting will be in late summer 2021