Despite having only been a local resident for 18 months, I’ve learned 2 very important things about the Association Anglophone’s annual Christmas lunch. 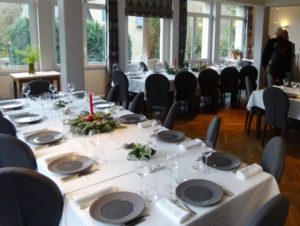 First, it’s advisable to wrap up very well for the occasion, as winter seems to feel that it has a standing invitation and always greets the day with an icy blast. Second, it’s probably the most important social event of the Association’s year from the point of view of both attendance and cumulative merriment. Indeed, it’s so important that it really deserves 2 reviewers.
The first was provided by our friend – let’s call her Mrs S – when we delivered her back from the event to her home and hubby, Ebeneezer, who’d preferred to stay at home listening to Brexit news and was in dire need of seasonal cheer.
Her responses to him went as follows. How was the restaurant? – Beautiful – and the food? – Delicious – Lots of people there? – about 80, so I need a rest! – and with that she disappeared upstairs, having said all that needed to be said.Even so, I feel the event deserves a little extra description. The venue and meal were indeed as described by Mrs S, but it should be stressed that the restaurant was especially warm, light and spacious, whilst service was efficient and friendly. 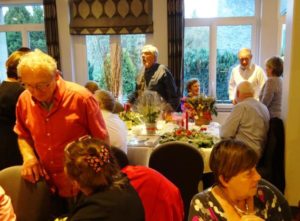 The general consensus seemed to be that the Committee had done well to find a venue, which added to the pleasures of the occasion. In particular, its lay-out facilitated mingling and mingling is an essential aspect of this event as everyone wants to take every opportunity to greet old friends, swap news not to mention gossip and extend festive invitations. In fact, so extensive and noisy was the mingling, that it led to Mrs S’s sole factual error, because by my count there were just under 50 guests present, not the 80 or so that she and others understandably believed.
Suffice it to say that chatter and hilarity prevailed for over 4 hours and a good time was had by all. We benefited from the stentorian tones of Jacques, who alone could call the assembly to order and establish the silence necessary for such essentials as thanks being given to the Committee and the restaurant staff and most important of all, the auction of table settings and the raffle, which was ably and impartially conducted by Jean-Christian. 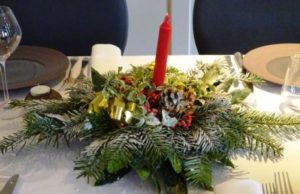 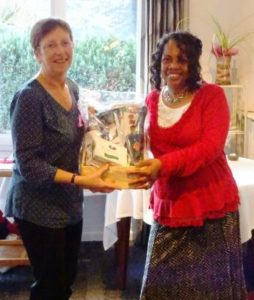 Finally, I understand that the resplendent Christmas crackers, which adorned the tables, were donated by Cheryl and Sean even though they couldn’t attend. Very generous indeed, though personally it would be appreciated if in future crackers without jokes could be provided, as I’m worried that my reply to a request, from the non-English speaking lady who was sat next to me, to explain the pun involving an elephant’s trunk, which had fallen into her starter, may have irreparably set back Anglo-French relations.