Food and something crazy, the ingredients for a good day out, were what we could look forward to in August, as lunch and mini-golf at La Baleine had been organised for the 10th.

We met up at midday at Le Krill, one of my favourite restaurants in the area, located in a pretty setting and serving typical Normandy food with delicious sauces at a reasonable price. There were about twenty of us to enjoy a good meal and lively conversation.

Then, full of enthusiasm for burning off the calories, we went to the mini-golf park nearby.
The weather, after the recent heatwave and storms, was perfect for a game, keeping dry but not too hot. We were divided into groups of four to proceed around the course with varying degrees of skill. 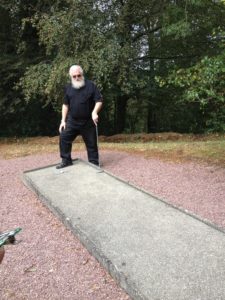 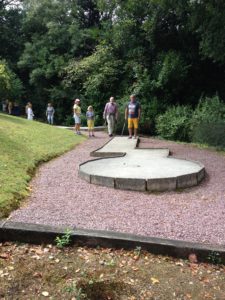 Our balls flew along the straight, round corners, across diagonals, up levels, through tunnels, over bridges, through a windmill, into a bucket, round spirals, and finally, if we were lucky, into the whale’s mouth! Whether you could or couldn’t succeed in getting fewer than the upper limit of seven strokes per hole, it was fun trying. And might I say that Kay managed to get a hole in one at hole eight, no mean feat on crutches!

We finished up with drinks and crêpes while scores were tallied. 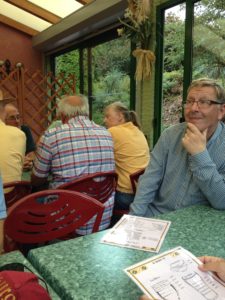 The winners were declared as Alan overall winner) for the men and Christine for the women. They received a nice box of chocolates each. But we were all winners and received, appropriately, a box of mini Smarties! 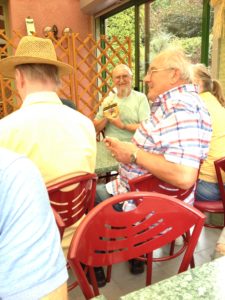 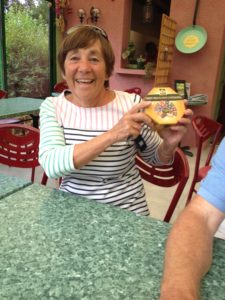 Thank you to the organisers, it was a great day.