You may already know that some of our craftier members have been busy creating a banner to help make the
Anglophone Association more visible at events, such as the annual fair at Les Unelles, where we had a stand to promote the Association. On Tuesday, 5 September, the Craft Group members gathered at Sharon and Alan’s home for lunch, after which, the finished banner was presented to our President. 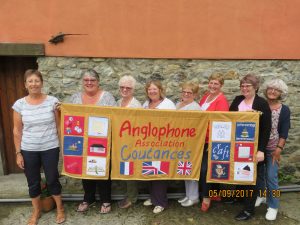 The plans for the banner began late last year, with meetings over coffee and cake, and it was decided to have a large central panel along with two separate, narrower, side panels. The panels can then be hung together, or separately, depending on how much space the association is allocated at an event.

Golden-yellow was chosen for the background, with accents of red, white and blue to reflect the colours of the French and British flags.
At the start of this year work began in earnest, with all of the craft group members – helped along by more coffee and cake- embellishing squares, which depict the association’s various activities. 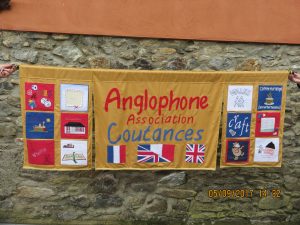 These squares were then sewn onto the side panels, whilst the central panel was decorated with the name of the Association and its logo, along with the Union and Tricolor flags
in miniature.
The end result is a striking banner, which, hopefully, will increase our visibility and give a positive impression of the Association.
A big thank you is due to Sharon and her group of crafters – Daniele, Catherine,
Yvonne, Karen, Ann and Judi.