As new members of the association we were very pleased that our first outing would involve a visit to Lucerne Abbey, a place that has long been on our agenda. The well attended trip started with an opportunity to meet association members and enjoy a good lunch at L’Auberge du Thar in La Haye Pesnel.

After lunch we had a short drive through lovely countryside to the Abbey at Lucerne which is situated deep in the wooded valley of the river Thar in the centre of the triangle between Avranches, Granville and Villedieu-les-Poeles. 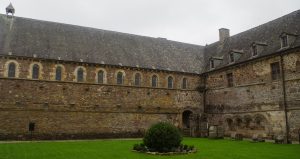 On arrival we were all met by our guide for the visit and as we gathered in front of the abbey it quickly became apparent that he was extremely knowledgeable and humorous. He delivered in perfect English a detailed and interesting account of the history of the abbey and he was more than happy to take numerous questions from the group. 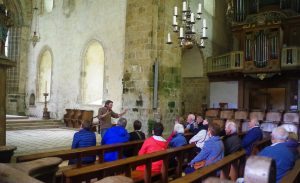 Space in this article does not allow us to cover the vast and varied history of the Lucerne Abbey provided to us on the day, but for those members who were unable to attend or are considering a visit a short summary follows: 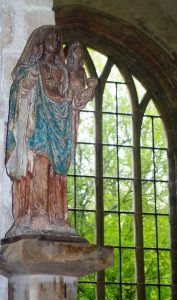 The abbey was founded in 1143 and is a wonderful example of restored Cistercian architecture. The foundation stone of the permanent buildings was laid in 1164 and construction lasted until 1178. The Cistercian Order sought to return to the lifestyle of St Benedict and emphasis was upon manual labour and self-sufficiency. This was evidenced largely by working in the fields but extended to the well-known craft of brewing ale. Abbeys were often sited in isolation and the monks were thus able to concentrate on developing self -sufficiency. They maintained their forests and preserved their timber. Throughout the early centuries of the medieval period the Cistercians were the main source of the diffusion of technological knowledge throughout Europe in the fields of agriculture, hydraulic engineering and metallurgy. The Abbeys built by the order reflected their values. The architectural style is one of elegance and simplicity and those are the qualities that exude from the restoration project of the Lucerne Abbey. As is often the case in such projects, the early success is largely due, not to a formal body or committee but to the impetus and passion of one individual. Abbé Lélegard bought the Abbey in 1959, saving it from ruin. The ruins were classed as a historical monument in 1928 and in 1959 the enormous task was begun, which still continues under the “Fondation Abbaye de La Lucerne d’Outremer”, of the restoration of the abbey. The first phase of the work was the reconstruction of the abbey church, particularly the ogival crossing vaults and the west front with its Romanesque portal, continuing to the refectory and cellars. Work has continued since then and the tithe barn, the Romanesque lavatorium (the only one in Normandy), the medieval gatehouse (with its bakery and courtrooms), the dovecote, the park, the 18th century abbot’s lodgings and the ponds are all now restored. The chapel of Blessed Achard is in the process of restoration. One of the aims of the “Fondation Abbaye de La Lucerne d’Outremer” has been to re-establish a monastic community at La Lucerne, and the abbey is still being rebuilt with that intention. Abbé Lélegard commenced the work of restoring it to its original beauty and the work continues largely with contributions from overseas.

Much of the Abbey has been restored and some of it actually re-built, all in harmony with its original architectural style. Originally Romanesque in scale, with only occasional Gothic detail, the whole environment was created for the purpose of focusing on following the faith and the contemplative lifestyle.

Following the tour provided by our excellent guide in a style that brought the whole story to life we had the opportunity to spend more time at the abbey. We were able to go back over the areas covered in the tour and also wander the grounds taking in the viaduct, the dovecote and many other buildings. We thoroughly enjoyed this very well organised trip and highly recommend it. As a bonus the weather was kind to us and the rain held off. A very good day!

Write up of the visit and photos courtesy of members.