Wednesday September 12th was unusually chilly and damp for this summer, but that did not spoil a very interesting Anglophone day out in the Val de Saire, in north-eastern Manche. 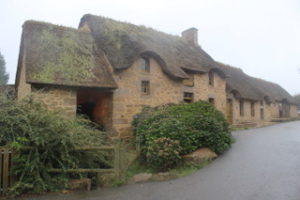 The day began at this 18th century watermill, which is still in working order, and we were treated to a view of its machinery in action 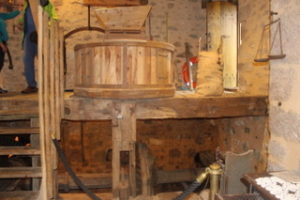 The excellent guide took us through the complex mechanism that converts water power into milled flour. 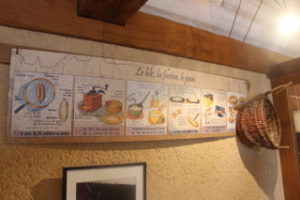 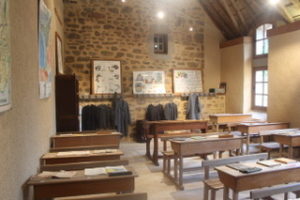 She also explained the background to the mill’s name – Marie Ravenel was the daughter of the miller and became a noted poet in later life.
The drizzle let off long enough for us to have a wander around the grounds and admire the beautifully thatched roof of the buildings. 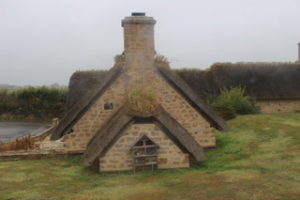 Everyone was very impressed with the painstaking restoration of the mill,
which has been carried out by the local Communauté de Communes.

We then moved on to have lunch at the Auberge du
Grand Moulin in Fermanville, where a convivial time was had by all.

Next it was to the Château de Carneville. 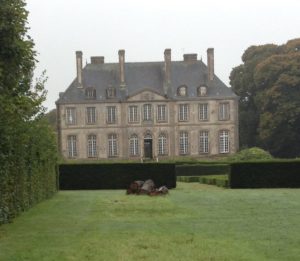 This is one of the small number of sites in France to have been allocated funds from the new Loto du Patrimoine. We were shown round by the owner, Guillaume – for whom this really is a labour of love – assisted by a member of the friends of the chateau who translated into English. The chateau requires full restoration, especially
as it has a serious problem with dry rot. The lottery funds of €390,000 will simply enable Guillaume to fix the roof. We were all astounded at someone having the vision, energy and enthusiasm to take on such a mammoth project. 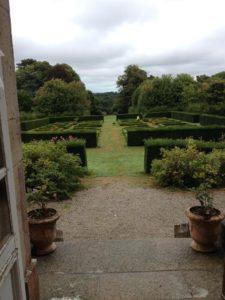 He took us on a tour of the gardens, which combine English, Italian and French influences; explained how there were, in fact, three chateaux on the site from different eras and finally treated us to a glass of apple juice and some bread baked in the chateau’s own bakery – with the added treat of some of his
grandmother’s pear jam.